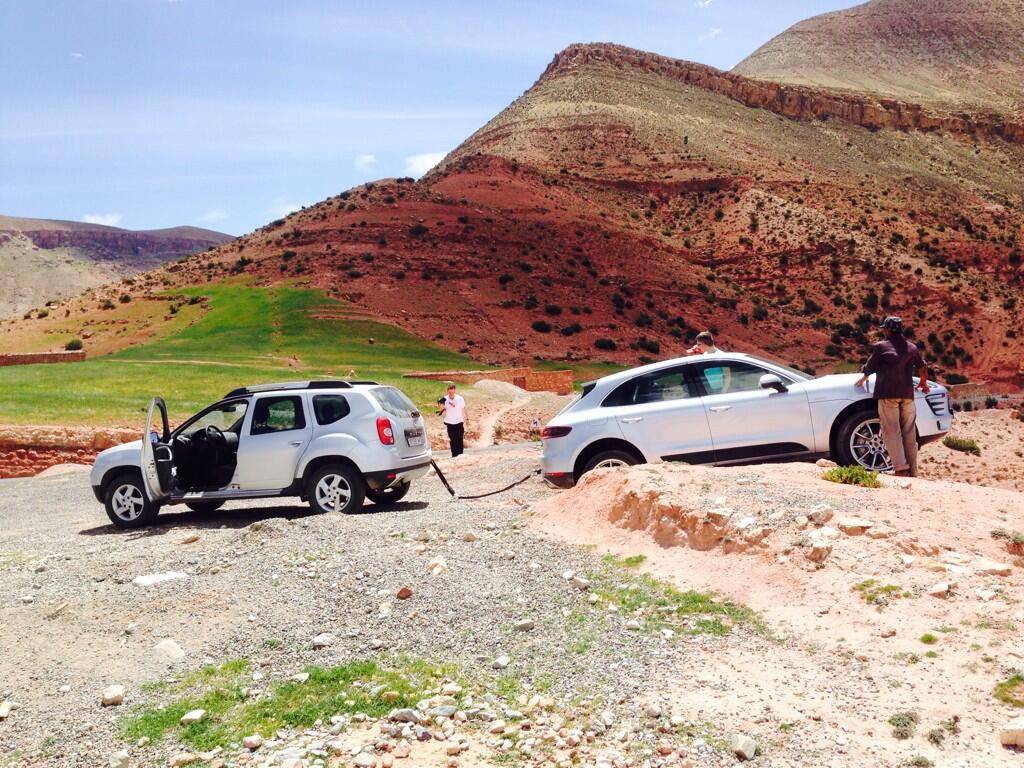 The truth behind the stuck Porsche Macan during the press day in Morocco. Probably you saw the photo of stuck Porsche Macan and towed by a Dacia Duster, it was taken by Gavin Green (Editor of Car Magazine). Personally, I thought the story was a bit unreal or setup? Even though, I only attended very few press days, there is always a recovery vehicle, safety notes and you would never end up with a Dacia Duster towing your press car.

So, I decided to analyse the seconds before the disaster. However, I didn’t have chance to send a drone. But I did some online research and tried to find people, who were at the event. Eventually, I found the real story.

Honestly, I was really curious about the incident. There is always some incidents happen during the press days but getting rescued by a local Dacia Duster?

Let’s go back to seconds before the disaster! We will investigate the series of actions that lead an innocent Porsche Macan to get stuck in Morocco and rescued by a Dacia Duster!

• Morning of the incident: Journalists were on a Porsche media event in Morocco in Macan.

• Half an hour later after departing from the hotel, one journalist excited to assess Macan’s off-road ability.

• Ten minutes before the incident, journalist made a cursory check of the terrain before heading off road. But didn’t notice the soft sand.

• 30 seconds before the incident, the innocent Porsche Macan approached to soft sand.

• Two seconds before the incident, the Macan sank into soft sand and beached on a crest.

• Despite some help from locals trying to push, the wheels had bogged in too far (This means journalist were pushing too hard to rescue. Never push hard when you are stuck. Stop for a minutes, get out of the car and asses the situation. Otherwise, our emotional behaviours will make things worse)

• After the all efforts, a freelance photographer nearby who had hired a local Dacia Duster offered to attach a rope to assist the Macan’s removal. However, the journalists could have called the Emergency Numbers provided in the road book for nearby Cayennes to arrive, but accepted this offer instead!

• The Duster helped pull the Macan out of the sand. Probably most cars could have assisted, as they would have the benefit of grip on the hard surface (Additionally, Duster doesn’t have any low-range or differential locks to save the Macan).

• The pair went on to drive the car on very tough terrain and were really impressed with it.

My personal view for the Porsche Macan? I really didn’t take this incident seriously and still listed as my future SUV! If you are planning to go for a serious off road experience, buy a real SUV with low-range and three differential locks. Don’t try with a Macan.

Porsche Macan is finally revealed to public. It is the mid-size SUV based on Audi Q5! But it is branded as Porsche, so we will love it! Personally, I don’t like the Audi Q5 but I loved the Macan. Why? Because, that’s a Porsche. It is that simple! And what Macan means? Macan means tiger in Indonesian.
Anyway, Porsche Macan is powered by two petrol and one diesel engine. Petrol engines are Macan S 3-lt biturbo 340 HP, 5.2 sec to 100 km/h, 254 km/h top speed and Macam Turbo 3.6-lt biturbo 400 HP, 4.6 sec to 100 km/h 266 km/h top speed. The diesel is powered by a 3-lt turbo with 258 HP, 6.1 sec to 100km/h and 230 km/h top speed. All engines are coupled with 7-speed double clutch automatic gearbox for seamless acceleration.
Also, Macan offers off-road experience by touch of a button. The off-road button increases the tension on the clutch, remaps the ABS and traction control. If the Macan is featured with air suspension, it will be raised 40mm. I assume Macan will cope with basic off-road conditions and won’t let you down. There is no low-range gearbox or locking differentials but you really don’t need them unless you go for serious off-road. Also, Macan may use the first gear as a low range like Cayenne does.
And also, you will have torque vectoring for faster cornering, radar guided cruise control, sport chrono pack for faster acceleration and Porsche experience.