As I noticed, people don’t believe that winter tyres can make that difference and the other fact is; their testosterone (shown in right picture) levels! For some people, using winter tyres during winter time and on snow is showing your deficiency of driving ability. In more clear way; a real man should drive on snow even with slick tyres, the testosterone hormones providing the adequate help while driving on snow :) Actually I could not see any relevant impact of hormones on tyres but many tend to believe this! Actually what they are saying is a small bit of your their potential, I think they could goto space without anything more than a car with summer tyres :)

I would like to thank you Brits who are following my blog despite adverse weather conditions :) And I could imagine how dreadful the UK weather can become. Now, it became worse! Snow is not something very common to see in UK and most of the drivers and cars are not prepared for this. I already mentioned about snow tyres in UK and I do hope that demand to snow tyres are booming :) Also I have one more suggestion to British drivers. As I saw on TV, many cars were not able to move due to lack of traction, or lack of snow chain. However there was no one to sell them snow chains in those bad conditions. I think of a new type of job should be created; snow chain emergency selling teams! When there are too much snow and people forget to bring their snow chain with them, these teams could sell them ;) They are doing this in Turkey! And people don’t forget their snow chains :)
There is also one more solution which is tried by Ken Blocks with his Subaru Impreza STi. With his snow cars, Impreza turned into a Siberian Tiger (These tigers are living in snow! or in others Tigers with better handling). And Ken doesn’t suffer any adverse effects of snow and having really good time! My advice is to buy snow cats and turn your snow torture into snow entertainment ;) I don’t know very well but I think you need to have four wheel drives to use these things properly.
And yes, I want to hear, which type of cars did not suffer from snow? Hmm, I am guessing four wheel drives! As I guess, most of the people hate them, because they were killing planet. Everything is going well on earth and SUVs are the only bad things! However this suggestion is not true anymore, the best car is SUV. If you want to survive, your wheels have to be rolling ;)
And thanks Top Gear for this video.
Picture and Video are from;
Top Gear Website 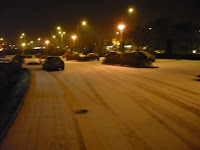 I thought last year was a heavy for UK. Of course relatively only a few centimetres, as I found out it didn’t for eighteen years! And now it is snowing really heavily. In some parts of UK, snow is up to thirty centimetres. This is a serious snow and needs serious precautions. Unlike the snowing, British people don’t like to replace their tyres during winter with winter tyres. As they told me, there is no snow why I should replace tyres! This is wrong, even if there is no snow, winter tyres provides better handling in cold weather. And last year, people were caught by snow with summer tyres!